Stereographs are made up of 2 side-by-side images which are taken from 2 slightly separated points of view, about equivalent to the distance between 2 eyes.  When viewed through a viewer, or by use of a mirror with inverted images, the images (in this case photographs) take on a 3D effect.  Each eye sees one image, and your mind combines them as it does with normal vision to give you depth perception.

Perú in 3D was recently shown at concurrent parties connecting Stanford, California and Buenos Aires, Argentina via projected online stereographs and live video on skype.  Some reflections on the event can be found below, and we took some amazing screenshots.  We even made some stereographs with the video conference computer 🙂

If you would like a viewer, I recommend the Loreto Pixi Viewer for $2.49 from berezin.com.  Viewers are great, pretty cheap, and make viewing really comfortable.  There is also a way to view with a mirror if you invert one of the images… I’ll try to get a diagram up to show how it works.  Either with a viewer or with a mirror,  you can keep up with new editions of stereographs as I develop them.  I am doing this Radiohead-style and releasing albums of images for viewer-chosen prices starting at $1.  The proceeds go toward continuing the art–both the 3D images themselves and the exchange and connection between cultures that the project aims for.  If you are interested in a subscription, drop me a line!  If you are interested in hosting a viewing party, please let me know!

Connections between people are so rich, so important.
It was joyous seeing my friends seeing Perú through my two eyes, through their own eyes, combining both images to see another corner of the world.  So beautiful.  I want to make that available to more people, especially those who make those corners so vibrant.
.
People asked: ¿What is it about?  Partly it’s about the mix of traditional and modern technologies and ideas making-up the authentic, complex contemporary.  That’s what we were exploring in Perú, especially in terms of medicine use, and also in my photographic explorations.  I used a 35mm camera, with 90 rolls of film that I lugged on my back in order to make pictures from the reaction of silver to light, and let the images live in physicality, interacting with Peruvians as they developed in photolabs in different cities and towns.  When I returned home I ended up sending the negatives off to be scanned in Kansas, and from there they started becoming the digital, astoundingly easily shared online images that they are now.
.
It’s also about glimpses.  It’s about wanting to make it last forever, yet also appreciating the fleetingness of the moment.  Honor it with a record of how things were for an instant, the conjuncture one specific time and place.  Share the vision with others.  Let the inspiration continue to reverberate.
.
I want to get more people into making stereographs, and do a project (possibly connected to a current UN project to get computers in schools around the world) to create an international database of user-generated 3D images… we can all  share these visions and hopefully come to a greater understanding and comfort among us so that cultures can have healthier, less competitive, more cooperative relationships.  A big goal, but one I’m willing to start working towards.  I believe sharing what’s beautiful and important to us is a good step. 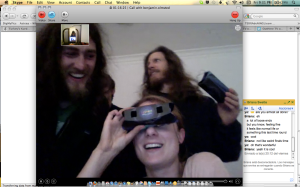 Jonas, Theo, Lawrence, and I check out the show from different continents. THANK YOU BEN for facilitating in California!